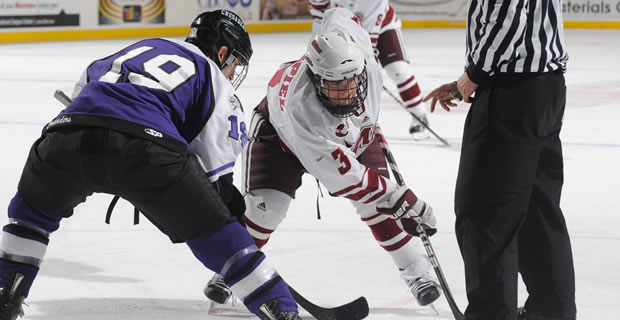 In only has third year as head coach, Greg Carvel has led the UMASS Men’s Hockey team to a number one spot in the country. Their overall record so far is 14-2-0 and 7-0-0 in Hockey East tied with Boston College. With the best power play percentage in the country, it is likely that they will keep up their great success. When asked about what it feels like to be number 1 in  the country, local star John Leonard said: “Its an honor, not many people get this chance”. UMASS has had some big wins against #10 Providence (3-2) in both home and away. Other victories include a home and away win against #7 Ohio State and #5 Quinnipiac. In terms of leading the team and keeping focus, assistant captain Cale Makar, who was drafted 4th overall in the 2017 NHL draft, said: “We have to keep the stress level down and the focus up. If we stay focused we will keep winning”. In terms of Coach Carvel’s feelings about the team’s recent successes, he said: “I’m proud as a coach, it’s very rewarding. We had a vision and we got there together. As a coach I walk around with a lot of pride. I’ve been watching UMASS hockey since I was a little boy and they have never been this good or had this many great players. It feels really good as a fan that the local team as reach the top of the polls.¨ With their next game home against UMASS Lowell on January 4th, everyone is hoping for UMASS hockey’s continuous success.