A Worldwide View of Holidays 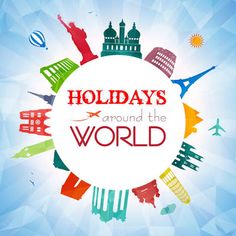 Whether there are kids running down the stairs to witness Santa’s gifts, a family gathering to light another candle on the menorah, or a large group visiting a mosque to pray, families and friends of all religions are beginning to celebrate their winter holidays. As December goes by and the “holiday season” begins, different religions start to express their beliefs and lifestyles through a multitude of celebratory acts.

One of the most renowned holidays across America is Christmas, which takes place on December 25th and is celebrated by those who practice Christianity. It commemorates the birth of Jesus Christ and beforehand, the religious season of Advent takes place. Christmas ordinarily consists of a large meal, gift opening, and decorating with lights and greenery prior to the actual holiday. Since this is such a largely practiced holiday, it is important to recognize those that are not as heavily recognized in our society.

Judaism is recorded as the second most practiced religion in the United States with approximately 15 million people observing these festivities. Hanukkah is the main winter holiday in the Judaism faith which lasts for eight days and eight nights. It begins on the 25th of Kislev, which is a Jewish month that falls on the end of November and early December. It focuses on the rededication of the Second Temple in Jerusalem at the time of the Maccabean Revolt. A common practice that takes place during these eight days is the lighting of one candle per day on a menorah. A menorah is a candelabrum consisting of eight branches, one for each night of Hanukkah, and a central candle in the center. It represents the lamp that Moses set up in the wilderness and later in the Temple of Jerusalem. For this reason, Hanukkah is also known as the Festival of Lights. Fresh olive oil was one of the first substances burned to light the lamps but now the lighting is mainly done with candles. Gifts are also given on Hanukkah, but they are similar to the small presents received in a stocking for Christmas, and are given on each day.

Bodhi day is another holiday associated with Buddhism that commemorates a figure in religious history. During this time, those who practice the Buddhist faith appreciate the day that the historical Buddha experienced enlightenment. This is represented by the iconic figure of the Buddha sitting underneath the Bodhi tree and experiencing his awakening. These festivities fall on December 8th, and on that day, Zen monasteries celebrate with a very intensive eight-day session of Rōhatsu. This is when Buddhists stay awake the entire night before practicing meditation the following day. This day is admired through kind acts towards others, additional meditation, chanting of Buddhist texts, and a traditional meal of tea and cake. A main goal of this day is to show appreciation for his achievements by presenting other with selfless acts.

Another religiously affiliated holiday that is present in the United States and originates from several countries is Mawlid an-Nabī. This is a celebration derived from the Islamic faith and is referred to as the “Birthday of the Prophet Muhammad”. It takes place during the last few days of November and the first few days of December. The main idea behind Mawlid an-Nabī is to honor Muhammad, the final prophet of Islam, of the third month in the Islamic calendar. Often an organization that takes place is a carnival-like event with a large assortment of food, street processions, and decorated mosques. Also at these events, children narrate stories of the prophet, people bring charity for others, and everyone expresses their love for Muhammad and his life. Some non-Muslim countries even take part in these festivities including India, which is highly recognized. The nation is known for their grand gestures towards the holiday with their night-long prayers, shrines, relics of the prophet, and parades. The work that other countries put in to their celebration of different holidays shows the connection that the nations have with one another. By a country supporting a handful of religious holidays that they may not be mainly known for, it exhibits support between the two cultures which will improve the world’s climate as a whole.

While all of these people across the world take the time to worship all of the aspects of their religion, it is crucial to think and learn about how others may spend their holidays.