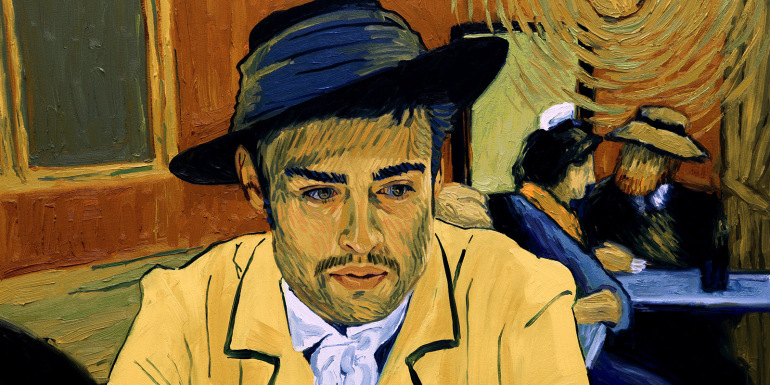 Amherst Cinema is known for its unique, dramatic, and touching films, and Loving Vincent is no exception to this rule. Being a huge Vincent Van Gogh fan myself, when Ms. Sause recommended this movie, a fictional story surrounding Van Gogh’s death (to my art class), I was very curious and decided to see it. Upon seeing the film’s preview and hearing about the painstaking work surrounding the production, I was intrigued and stunned at the outstanding effort put into telling this story.

Loving Vincent is the first feature-length film to be entirely done with oil paintings. Every single frame of the film is a separate oil painting, and they’ve been strung together to create the illusion of motion. Around 115 artists worked to paint 65,000 frames for this film in a span of six years. This movie was like nothing I had ever seen before, or the world had seen before, for that matter.

Loving Vincent expresses an incredibly beautiful story through equally beautiful visuals. Its setting is France, a year after Van Gogh has committed suicide. Prior to his death, Vincent wrote a letter to his brother. An old friend of Vincent gave his son, Armand, the task of delivering this letter. On his journey to deliver the letter, Armand stumbles upon various individuals with differing attitudes towards Vincent and his suicide. The movie jumps from events that took place during Vincent’s life to Armand’s timeline, through which the audience becomes enlightened by his interactions with other characters; we see our main character become fascinated with the life and death of Van Gogh, and a frustration towards those who refuse to understand what kind of man he was. The characters and landscapes in the film are based off of real works by Vincent himself. If you have any interest in art history and post-impressionism, much like myself, you will recognize how well the filmmakers incorporated Van Gogh’s iconic, original works into their story. The majority of the painting style in the film almost perfectly mimics Van Gogh’s, with bright colors and wide brush strokes. For flashbacks, the film’s painters adopted a black-and-white realistic style that much resembles a moving photograph. The way the paintings flow from one another creates the perfect representation of motion and truly blew me away.

This film’s unforeseen popularity prompted Amherst Cinema to add more showtimes to their schedule. It is still playing at Amherst Cinema’s studio theater. In addition, our school library will be receiving a copy of Loving Vincent this January. I’m sure Ms. Sause would be more than pleased to offer a screening of this film for her art classes or in her art club that takes place after school on Wednesdays. Art lover or not, Loving Vincent is truly a masterpiece from which just about anyone would take away a new appreciation of the arts and life of artists.