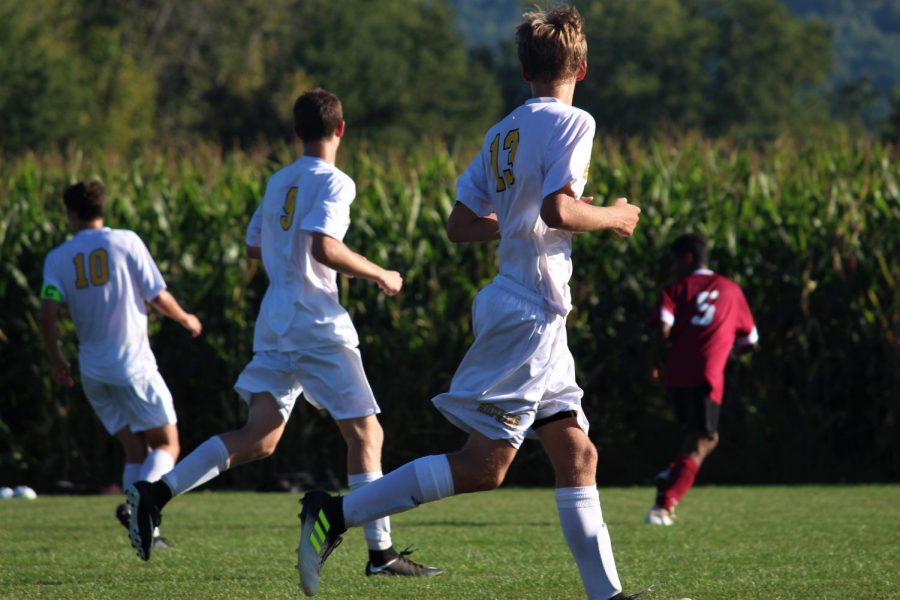 With their amazing record of 11-1, the Hopkins boys’ soccer team has not only had an outstanding season so far, but from the looks of it, they may be able to clinch their league title. The Golden Hawks started off their home opener in early September with a hard-fought 0-1 loss against the Division One East Longmeadow team. Despite the “L,” the boys addressed their weaknesses during practices and since then have only excelled. Their hard work has paid off from the get-go, and after nine consecutive wins, the Hawks made tournament early on in the season, giving them a high-seed ranking in the Western Mass Division Four playoffs. Playing difficult teams above their division, such as South Hadley, Easthampton, and Monument Mountain, the boys consistently win no matter the ranking of the opposing team. “We focus a lot on shooting and finishing and getting into the attacking third during practices,” senior and varsity veteran of four years Ben Andersen describes. The team’s current record and score statistics clearly reflect this hard work on attacking during practice. With only 12 games under their belt, the team has a whopping 51 goals across the board—15 of those goals coming off the foot of their top scorer, Ben Anderson.

Sideline spectators can tell that the boys hunger for success. The Golden Hawks step on the field ready to play. With precise passing, effective communication, and strong drill shots into the back of the net, this group appears to be unstoppable. In response to their winning streak, Andersen says, “We work really well together, and we all expect the best out of ourselves and each other every game and practice.”  By pushing one another to do their very best, the boys build team chemistry, which significantly impacts their performance on the field. Even someone unfamiliar with the sport can clearly see that the Golden Hawks have a strong sense of camaraderie. As the season is slowly creeping to an end, all of the wins that the boys’ team has acquired will give them plenty of momentum entering the postseason. Hopefully, this results in a league title, and maybe even a Western Mass Championship for Hopkins Academy’s powerhouse boys’ soccer team.