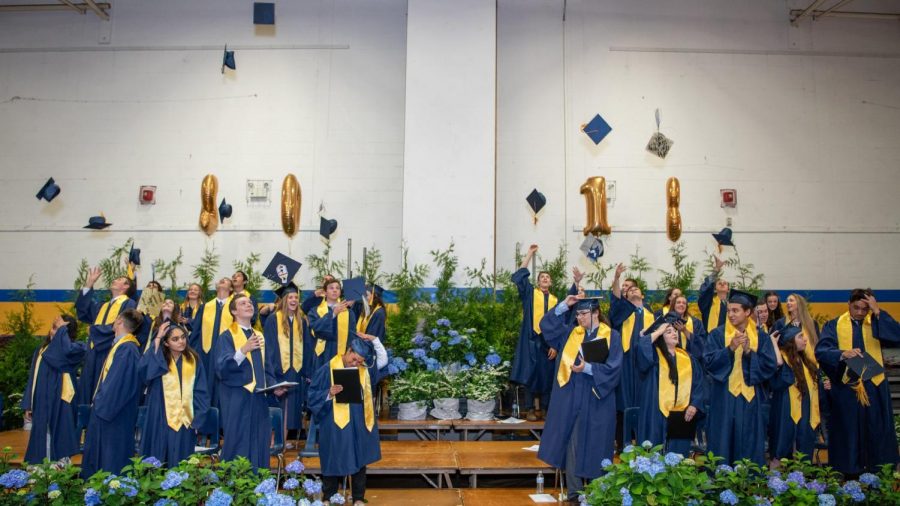 The class of 2018 at their graduation. Keep an eye out for pictures of this year's graduation!

6 years at Hopkins Academy. 53 Soon to Be Graduates. 1 Legacy.

With warmer weather, and longer days, comes the anticipation of summer… and graduation season! Each spring, Hopkins Academy has the privilege of setting its senior class free to begin the next chapter of their lives. This year’s graduation ceremony is Friday, May 31st, at 6:00pm in the Hopkins Academy gymnasium.

It was only six years ago that the class of 2019 walked through the Hopkins Academy double doors for their first day of seventh grade. Some were excited, while some were undoubtedly nervous to become Hopkins Academy’s freshest meat in a school with a student body of approximately 280 students. Seventh grade came, and as quickly as it started, it went. Middle school quickly followed suit. Then came high school, a glorious four years filled with drama, drivers licenses, and a boatload of standardized testing. With each passing year came more opportunity for the class to show off their talents and represent the school with dignity and pride. But just how much of an impact did 2019 leave on Hopkins Academy?

The Class of 2019 will have 53 students graduating this May.

Graduates will go on to continue their education at 25 different colleges throughout the United States.

Attending schools far and wide (and also locally!), these grads will be departing to nine US states this fall, with the farthest being Colorado.

Almost 50% of the graduating class has suited up for Hopkins Academy during their time as a student in sports including basketball, baseball, cheerleading, cross country, football, golf, soccer, and softball.

Samantha Jenks scored her 1000th career basketball point as a Golden Hawk in February of her Junior year. Her name is now displayed on a banner in the gymnasium.

For the first time in program history, the girls varsity basketball team (led by senior captains AJ Mitchell and Samantha Jenks) brought home a Western Mass title. In the midst of their historic run, they also managed to make it all the way to the state final championship game, making the 2018-2019 season the winningest one in Hopkins history.

Three boys basketball teams with members of the class of 2019 successfully brought home a Western Mass title (and defended it!) for three years in a row. Senior captain Caleb Graves played an integral role in capturing the crowns.

10 Banners in the Hopkins Academy Gymnasium

Throughout their time here, the class of 2019 contributed in hanging 10 banners on the gym’s walls in every sport from soccer to basketball to baseball.

2 Trips to Michigan for the FIRST Robotics World Championship

Seniors Aedan Cullen, Alex Locher and Talula Patenaude led the way to earn the right to compete with some of the best and the brightest robotics minds throughout the world at the FIRST Robotics World Championship not just once, but twice.

For the first time in school history, the Hopkins Academy Mock Trial team swept Region 32 in the 2017-2018 season, going undefeated on the season, and advanced to the regional competition before falling to long time rival PVPA (Pioneer Valley Performing Arts). It was the next year that seniors Simon Wilhelms-Tricarico, Kiernan Wackerbarth, Gage Spanknebel, and John Soto-Guzman not only contributed to an unparalleled repeat of their undefeated season, but also aided in the team’s advancement to the Elite 8 round held in Boston (out of 128 teams statewide!)

This past April, the Hopkins Academy drama club put on a production of “The Director’s Nightmare”, a comical play about a director’s struggles to produce their own play, starring Mikayla Lastowski, Talula Patenaude, Alex Locher, Ben Hernandez-Summer, and Jenny Wild. Although not acting, Annie Leboeuf and Sarah Tucker took on critical roles backstage on the crew.

In recognition of both their academic performance as well as community service efforts,     seniors were accepted into the Pro Merito Honor Society throughout the duration of their time at Hopkins. Requirements for acceptance include both a minimum number of community service per semester and the demonstrated ability to maintain a GPA higher than the threshold. Those who were accepted this past fall include Ida Grace Fendell, Marie Murphy, Sarah Tucker, Mikayla Lastowski, and Annie Leboeuf.

Zach Jekanowski had the privilege to represent Hopkins Academy at the All-State Music Festival in Boston this past spring. His dedication and passion for music has unparalleled throughout his time here at Hopkins Academy.

Concert, Marching, Pep, and Jazz. Playing everything from piano to trumpet to percussion to bass, the class of 2019 will be missed both on the stage and in the street.

Kyle Gido has his eyes set on becoming a United States Marine. He leaves for boot camp this August. Best of luck Kyle!

Every October, approximately 1.1 million high school juniors take the PSAT. Aedan Cullen was recently recognized for scoring in the top 1% of all test takers throughout the entire country.

With diplomas in hand and eyes set on the future, there is no telling what the soon to be graduates will accomplish next. Congratulations, Class of 2019!