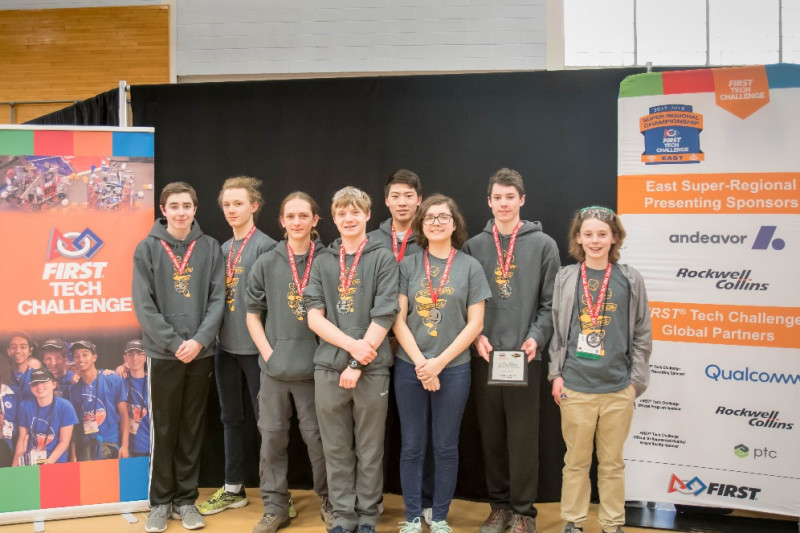 Last Saturday (March 2nd), nine students from Hopkins Academy traveled to Natick High School to compete in the Massachusetts State Robotics Championship. Although they faced fierce competition, the team ended up being victorious and bringing home a trophy, banner, and invitation to Detroit to compete in the World Championships for the second year in a row.

Evolution Robotics is a community based team that competes in the FIRST Technical Challenge, which is one of four competitions run by FIRST, an organization founded by the founder of Segway For the Inspiration and Recognition of Science and Technology. Each year, a new game is released that requires a robot to do specific tasks.

This year, the competition is called Rover Ruckus, which is where the robot must lower itself from a raised lander and drive autonomously to claim a “depot” and score little cubes and balls into, and latch onto the lander. A full game description can be found on YouTube on the FIRST Tech Challenge channel: (https://www.youtube.com/watch?v=rR4gR4l2XA8)

In their first two years of participating in FTC, the team had done well, reaching the state competition, but never advancing further. However, last year, they qualified for the Super Regional competition Scranton, PA, winning enough matches that qualified them for the World Competition.

The team was successful in the qualifying matches before the states competition, and did very well on Saturday. However, an unfortunate technical malfunction prevented them from receiving the first seed, which resulted in their elimination after the semifinals. Nonetheless, Evolution Robotics was one of only four teams that were given an invitation to worlds in Massachusetts, as they were granted the Inspire Award, which allowed them to move on in the competition.

The Inspire Award is an award that “is given to the team that embodied the ‘challenge’ of the FIRST Tech Challenge program. The team that receives this award is a strong ambassador for FIRST programs and a role model FIRST team. This team is a top contender for many other judged awards and is a gracious competitor. The Inspire Award winner is an inspiration to other teams, acting with Gracious Professionalism both on and off the playing field. This team shares their experiences, enthusiasm and knowledge with other teams, sponsors, their community, and the Judges. Working as a unit, this team will have showed success in performing the task of designing and building a robot. This award is the highest award a team can receive, and thus earned them the invitation to worlds. 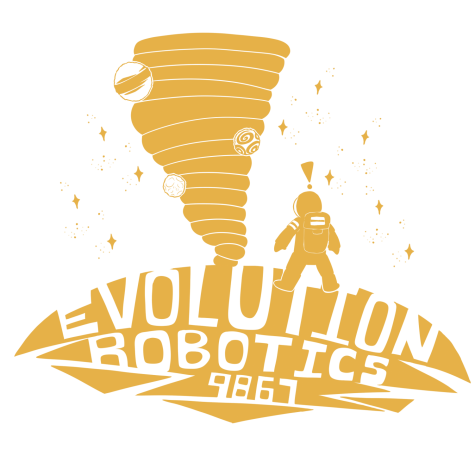 In September, all participating teams were introduced to the new game, Rover Ruckus. Following this was a period of brainstorming and prototyping with Computer Aided Design (led by Kieran Cullen), as well as actually building the robot. Throughout the season, modifications and changes were made to build the most reliable and efficient robot.

While many robotic parts can be bought of the shelf, some were custom built. The programming of the actual robot was written by Aedan Cullen. Everybody else on the other hand helped to build the robot.

The team also had to reach out to local businesses for fundraising, and were helped by their mentor, Robert Cullen. In addition, the team undertook the task of community outreach by mentoring a new FTC team in Holyoke, as well as one in Mauritania. Not only did the team hold a free workshop for elementary students to learn more about robotics with Lego Mindstorms, but they also demonstrated the robot and how it works at their school. All of this was intermixed with the team meeting with robotics experts from UMASS in order to learn more about the future of robotics.

A lot of hard work has gone into their robot, and they have earned a spot in the world championships again. The competition takes place from April 24-27 in the Cobo center in Detroit. The entire Hopkins community would like to wish the Robotics Team luck as they advance in this prestigious competition!