The Hopkins’ Mock Trial Team Becomes Regional Champions for the Second Year in a Row! 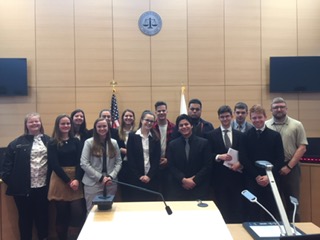 On January 30th, 2019, the Hopkins Academy Mock Trial team officially became Region 32 champions after defeating Mahar 86-80. Mock Trial, which is hosted by the Mass Bar Association, is a competition in relation to courtroom proceedings where schools from across the state get together and argue a case either from the prosecution or defense standpoint. The number of trials in the preliminary competition (aka regional competition) varies on which region you are and how many schools are in said region. In terms of Region 32, there were a total of four schools: Hopkins Academy, Eagle Hill School, Pioneer Christian Redemption School, and Mahar.

Every year, the case changes and is either a civil case or a criminal case, both of which are hypothetical. This year, the case for the state of Massachusetts is a criminal case. There are three major players in this year’s case: police officer Nat Hart, Grey Humansky, and Rae Lugansky. A summary of the case provided by the Mass Bar Association is the following: “Nat Hart has been charged with the criminal offense of violating 18 U.S.C. § 242. Specifically, the government, alleges that the defendant, acting under color of state law, willfully used excessive force in effecting a seizure of Rae/Ray Lugansky, and that this use of excessive force resulted in Rae/Ray Lugansky’s death. The prosecution bears the burden of proving each element of the charge beyond a reasonable doubt.”

When asked about the team’s major accomplishment, teacher coach Mr. Burns said that he thinks,  “that it is an awesome accomplishment and that the team should be very proud of it.” In addition, Mock Trial participant Davide Rotunno said, “I am very proud of all the participants who came together to make these victories happen. We are all very eager to represent Hopkins Academy in the Regional Competition.”

The Hopkins Academy Mock Trial team will be traveling to Clark University in Worcester on March 3rd, 2019 for the state competition. Good luck to the team with the remainder of their season!