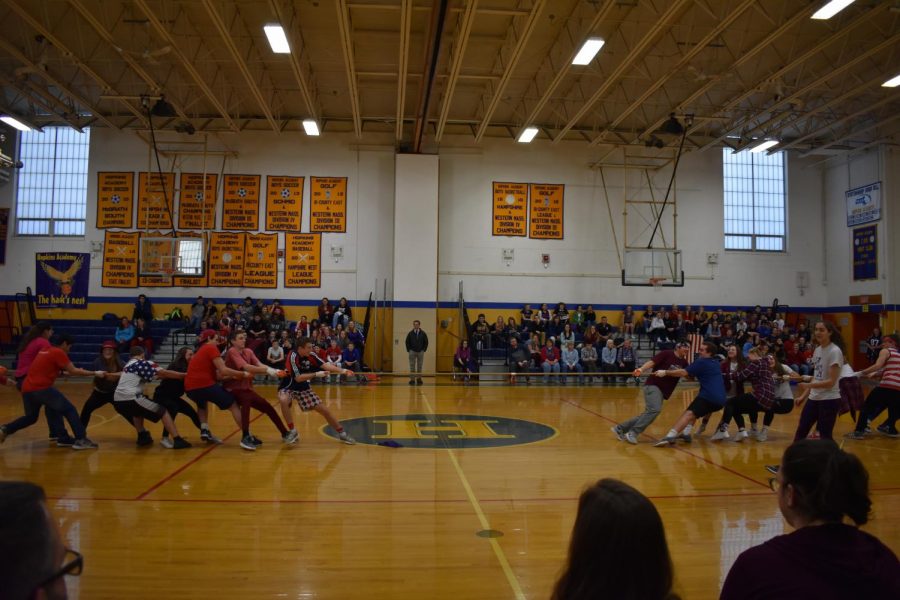 As the month of February comes near, so does another year of Spirit Week at Hopkins Academy. Spirit Week provides an opportunity for students and faculty members to really show their ‘Hopkins Pride’ as the Hopkins Academy Cheerleading Squad would say. Spirit Week kicks off on Friday, February 8th with Pajama Day as well as Penny Wars. The money raised this year from Penny Wars will be donated to Meghan’s Light, an organization whose mission is to help find a cure for those living with Cystic Fibrosis as well as to inspire hope amongst families, friends, communities and people who are impacted with the disease. In addition to Penny Wars, Hopkins Academy Key Club is hosting a soup drive to help combat hunger in Western Mass. Just like Penny Wars, the soup drive is a competition between the grades in order to earn additional Spirit Week points. Cans will be collected through February 2nd in the boxes on the stage in the Cafeteria during both middle and high school lunches. A new addition to the Spirit Week activities is replacing four court volleyball with four court capture the flag. On Wednesday, February 13th the 6th graders will be coming over to experience a day of Spirit Week for the very first time. The goal of the field trip is to get them excited about coming to Hopkins next year and allow them to get a preview of the school climate.

Theme days this year allow new variety and stick to the classics as well. As previously mentioned, Pajama Day is on February 8th, the Friday before Spirit Week officially begins. Monday February 11th is America Day, Tuesday is What the Heck Are You Wearing Day, Wednesday is a hybrid between Twin Day and Superfan Day, which is new. Superfan Day encourages students to show off whatever they are a fan of. Examples could include a sports team, a movie/film, a book series, or a favorite celebrity/actor. Decades Day makes a return on Thursday. Color Day will conclude the thrilling week, with the color assignments for each grade being the following:

As for the events, Student Council has decided to bring back the blindfolded obstacle course due to popular request. The crowd pleasing event Hungry Humans Hippos will return as well. Below are the scheduled events for the week (Subject to change):

Class Sign-ups for events will be happening shortly. So….who’s ready for Spirit Week?